“So was James one of your close high school friends?” Austin asked me.

We were standing next to a bridge over a tiny creek in a more rural part of Juneau, Alaska. Our Airbnb was next to a forest that covered a rather steep and slightly imposing mountain. The area was as if everyone who ever wanted a summer cabin built right next to the mountain and turned it into a suburb.

“Honestly, we weren’t that close. It’s been seven years,” I said. “I’m surprised James even remembers me at all.”

The Alaska trip was almost on a whim. Almost. We’re spontaneous planners.

About a month earlier, I had Skyped my parents, who were on a mission in Boston. Their information of the day regarding a couple of my siblings: “Brian and Tyler are going to Norway and Iceland!”

Despite the fact that we had recently returned from a three-month trip to Germany, I was insanely jealous and quite ungrateful of my own privilege. I told Austin, “I wouldn’t mind if we went to even a place like Alaska to see the midnight sun.”

We immediately Googled the trip and found round-trip tickets for $900 for both of us combined. While Juneau isn’t close enough to see the midnight sun, I was too excited to let it bother me. When I announced the trip on Facebook, an old high school friend, James Nelson commented and said, “Hey, I live in Juneau. Hit me up when you get here.”

I messaged him. “Hey James! My husband and I are interested in going to the ice caves and were wondering if you’d be willing to take us?”

He responded, “Right on! I would love to.”

Through a jumbled correspondence of Facebook messages and cell phone complications (Sprint is the worst, I was on roaming the entire time), we managed to schedule a hike for the Saturday we were there.

I told my thoughts to shut up because James just drove up in his little black car.

There was a girl in the car, Sarah. And a big black husky mixed with a Labrador, Hank. Austin, the dog-whisperer, immediately took to Hank and Hank to Austin. We all hit it off surprisingly well – well, it was a surprise to me. Perhaps all people in Juneau are easy to get along with. 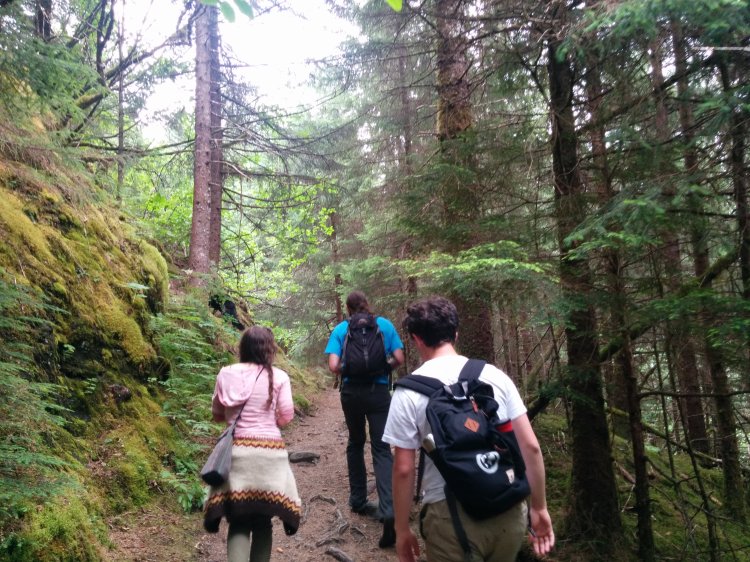 The hike itself was challenging on the way up. You remember in The Parent Trap where the twins and Dennis Quaid go on a camping trip and he drags along his evil fiancee Meredith? So the Lindsay Lohans and Dennis Quaid are clearly old hat at hiking and camping, no problem. I thought I was them.

I was Meredith except with worse fashion sense. I was the idiot holding everyone back because I was too slow, too out of breath, too weak to keep up with everyone. James did this on a daily basis as a glacier guide while Sarah was one with nature and practically floated from rock to rock. Of course Austin, who ran mountains like they were crumbling to pieces was keeping up with them just fine. And Hank was, well, a dog. If he wasn’t running around, he was killing some squirrel or peeing on something.

I was worse than all of them combined. Out of breath than the worst asthmatic and seriously rethinking my desires to live in the wild. I was Meredith in attitude.

Why does Austin feel like he needs to stay with them? I thought angrily, gasping as I made it to the top of another hill. The group had once again vanished from sight. He’s my husband! He’s supposed to be with me! I could die on this trail and nobody would notice because I’m the psychotic wife of Austin –

There was Austin, waiting for his psychotic wife at the bottom of the next hill. As I approached, he smiled at me. “Are you okay?”

“Yes,” I said, angry that I no longer had grounds for being angry.

“Are you sure?” Austin could always sense when I was upset. He was so sensitive, the little turd.

“Sorry, Liesl!” James called. “I have such long legs.”

This was true. James has always been lanky. Besides, Emotional Liesl and Logical Liesl have gotten along much better lately so I decided to laugh at how slow I was instead of turning into evil stepmother Meredith. I handle lizards much better than she did anyway. 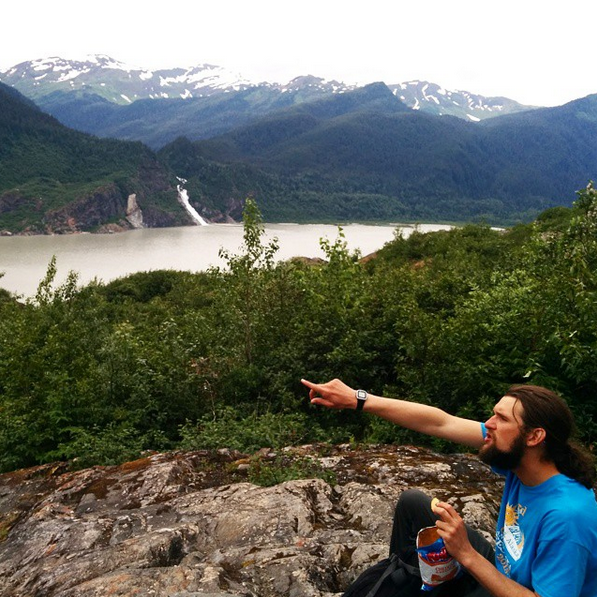 We finally stopped for a break and ate lunch. Mine and Austin’s were peanut butter sandwiches that Austin made. We stared out at the incredible view of mountains and ocean while James told us how the only places in the world where you’ll get rain forests, glaciers and oceans are New Zealand, South America and Alaska.

After we finished and got started again, James began reminiscing about the old times he and I shared.

“Remember band?” he asked. “Remember when we went to Lagoon?”

I don’t remember James. I forgot band. Band sucked. But James kept listing off his favorite memories of spreading mild mayhem and ruckus in band and I just laughed along. When those memories were done, I brought up all the people we knew in high school who moved to Alaska with James.

“What happened to Tim Abbot? He looks like Blake from Workaholics,” I said. Austin loves Workaholics. Whenever I saw pictures of Tim online I’d say, “Oh, it’s the Blake lookalike. Here are some rad pictures of his adventures in Alaska.”

“Tim dressed up as Blake for Halloween!” James started laughing, and Austin joined in.

The hike was incredible. We saw the glacier and picked up a fellow hiker to join us. One ice cave was particularly frightening (ice roofs and…raging river below, with hardly any ground in between) and I may or may not have sobbed hysterically from sheer fear. The other one was delightful and cozy. 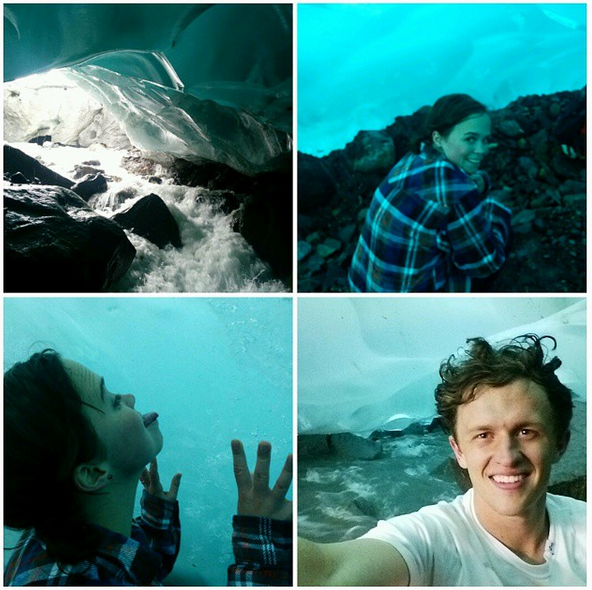 After the hike, James and Sarah invited us to make halibut tacos with them. We bought the halibut, which was an outrageous $20 for a single pound of halibut.

Cooking the halibut was incredibly fun. James took us to his house, a roomy place that held about 5 other roommates and played Gorillaz. He took his hair out of his ponytail and danced with Sarah while Austin and I cut up onions and peppers and tomatoes. As Sarah fried up the halibut, I asked James about his life.

James ended up in Alaska after graduation from the University of Utah. “There’s something about the sun,” he said. “When you go back to Utah and you’re not used to the sun being around all the time, it just gets to you.”

Whenever family or friends stopped by, James pulled out all the stops. He gave his mother, a cancer survivor, a tour on the helicopter he flew over the glacier. He hooked up his parents with free whale-watching. “I just get so excited every time one of my friends comes up here and I want to show them everything,” James said. “I want them to have the best time here and show them what I experience daily.”

“So that’s why you contacted me,” I said. “Because it makes you so happy.”

“I haven’t forgotten about you guys,” James said.

I’d forgotten. I honestly figured that he, like most people I knew, was more than willing to cut ties with the people he knew in high school. Maybe just catch up by glancing at their Facebook page every once in a while.

I remembered high school. James and I sat in history together our sophomore year. With our friends Heather and Kinny, we’d do group projects and goof off in our downtime. I liked to doodle all of our names in an attempt to improve my handwriting, and James misinterpreted it as a crush on him. He freaked out, but Heather and I laughed it off and corrected the mistake.

After that year, I don’t remember anymore. I think we drifted apart.

“I try to fill my life with as many good people as I can,” he told me. “I’m very fortunate.”

He also got us in to see whale watching for free. We saw humpbacks breaching and bubble necking and it was incredible.

Austin wanted to pay James back or do something huge for him. I knew that what James did for us was simply because he wanted to. “Let’s just pay it forward,” I said. “We’ll find ways to help people.”

For me, the gift was honestly that James just remembered me. And I wanted to do the same for other people too.