I follow Humans of New York on Instagram. If there was ever a cause that impressed me and inspired me, this is it.

The man in charge of the account recently went to Pakistan and took pictures of the people who lived there. The lives of some of them were exceptionally harrowing, whereas others related similarly to my own life. I was really impressed by two stories in particular. Let me show them to  you. 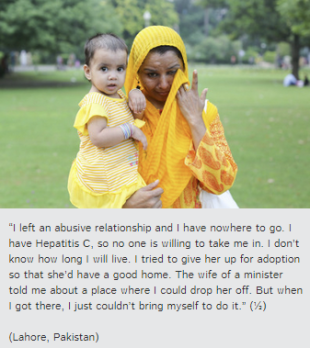 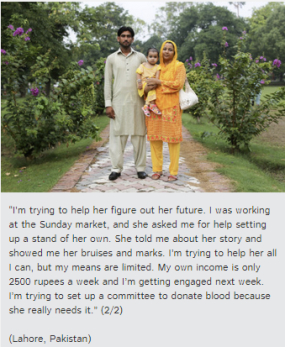 There was such compassion. Such an outpouring of love and sympathy and – this is the best of all – an overwhelming desire from so many people to just help this woman. Here’s the response of Brandon Stanton, the photographer and overseer of the blog:

And that’s just the first story. Here’s the second story that impacted me.

I donated only $20. Maybe I should’ve done more, but I am always uncertain about how much we have that is enough. But my meager donation, along with hundreds of thousands of others, donated to this woman.

This was the best I could do. But sometimes it still feels like it’s not enough.

I am amazed by the compassion and charity that has been inspired by this single man. He alone was able to move people to help a cause greater than their own. I have never felt more united with strangers than I have for this cause.

Side note: I have to write this idea down before it escapes me. Maybe I could write the “make your mark” essay on this subject. After all, I only donated $20 because I’m poor. I try to donate to whoever needs it. C.S. Lewis spoke of giving until it makes us uncomfortable. I am rarely comfortable giving up our funds. Maybe I can show this as an example of how powerless I feel as someone who comes from a place of privilege and safety and how I donated to a cause to help others feel safe because that’s all I can currently do. I have many ideas, which is wonderful because I am never short on ideas. But I will see.