Hiking Y Mountain is a beast, but I have quite the love story with its child: the Y itself.

For those of you who are unfamiliar with Utah Valley, Y mountain is right next to Brigham Young University’s campus.

The giant, 788-foot Y was made over 100 years ago. The Ute name for Y Mountain used to be Wahdahhekawee (meaning “blessed mountain”) and the Y only exists because it was too much effort to put in “B” and “U” alongside it.

Hiking the trail to the Y is pretty much a rite of passage for anyone who lives in Provo. I mean, if you’ve lived in Provo and haven’t hiked the Y, are you even a Provo resident?

No, of course not – but don’t worry, you can redeem yourself. Here’s the pros and cons of hiking the Y.

Y you will likely hate the Y

1. The elevation gain from trailhead to top: 1,102 feet over the course of 1.2 miles. This hike is a steep bastard.

2. The elevation: 6,602 feet. If you’re coming from Hawaii, 1) I’m jealous, and 2) make sure you acclimate to the elevation here before hiking.

3. The view: Ugly as sin – there’s a lot of scrub brush and you get a decent view of the valley, but you might be unimpressed by Utah Lake.

(I personally love the view, but I’ve had more than enough arguments with coworkers over how much they hate the view and how terrible the hike is and how it’s not even worth it and OKAY STERLING, I GET YOUR POINT.)

Still – anyone can do it. It’s all in your pacing.

4. It’s hard as balls. Back before I ever showed any athletic leanings, I hiked the Y with Austin and his brother. I was panting and pausing every leg of the way. There’s approximately 14 (or 12, depending on your definition) switchbacks – and I was pausing at each one of them, panting, gasping for air, begging them to slow down.

My cardio was terrible. I had hiked Timpanogos just the summer previous and even though I had taken a spin class and a swimming class, I still wasn’t used to this kind of exertion. Even though I made it to the top, I couldn’t believe Austin had actually run this thing.

But I kept going back, and here’s why.

Y you should love the Y

1. The distance: It’s about 1.2 miles to get to the top. So if you’re in reasonably good shape, and you’re looking for some exercise that’s outdoors but doesn’t require more than an hour’s worth of commitment, this is a great option.

2. You don’t actually have to go to the top: As you approach the Y, you have three options:
1) take the trail that leads to the bottom of the Y,
2) continue up a couple more switchbacks and finish at the middle, or
3) finish at the top.

3. You can do it any time of year, any time of day. I’ve done this hike during all four seasons. I’ve done it in the morning, afternoon, and night. At the beginning and end of fall and winter semesters, BYU lights up the Y and it’s a lot of fun to hike up to it.

4. Hiking is good for you. This hike was therapy when I had gotten my hours cut at my first full-time job and eventually was laid off.

I had a lot of extra time and it was the beginning of winter – plenty of time to be stuck in my own head and think about how worthless of an employee I must be to get my hours cut.

I couldn’t live like that, so I left the house and started hiking instead.

I hiked the Y at least 9 times that winter. I came to push myself more than I thought I was capable. Hiking on snow in all its forms is something else. Powder, packed, melting and muddy – it provides a lot more exertion and sweat.

The outdoors are good for your mental health because it forces you to focus on the present moment of not dying.

Winter hiking the Y did that for me. I remember one night in particular – it was about 5 and my husband was finishing up some final exams, so I decided to go for a hike before picking him up.

There was fresh powder – at least 6 extra inches, and I almost got the car stuck in some snow, so I parked a quarter mile away from the trailhead just so I could get the car out when I left.

Oh, and the ignition was acting funny, which meant there was a good chance the car wouldn’t start if I didn’t turn the key just right.

I was the only person hiking that evening – all except for one backcountry snowboarder. I had started off ahead of him, but he eventually passed me and we made some small talk about his snowboarding before he cruised down the mountain.

It was cloudy and cold and the snow was thick by the time I made it to the top.

The sun was setting fast and I had to get off that mountain because I could feel the cold start to settle in.

I started going down the trail as fast as I could without slipping. I eventually started running, because no matter how hard I was working, my body temperature was decreasing. The sky was getting darker, but the white snow made it okay.

I eventually made it down to the trailhead parking lot, but since I had parked further down, I still needed to make it to my own car and start it.

I texted Austin after trying 10 times, worried he’d have to walk to the trailhead to start it (it was about 2 miles from campus), but after trying 10 more times, I FINALLY started the car. But even then I had to dig it out and scrape the windshield so I could just escape and be warm again.

It was dark by the time I met up with Austin – but I survived. And even though it was terrifying, I LOVED that hike. 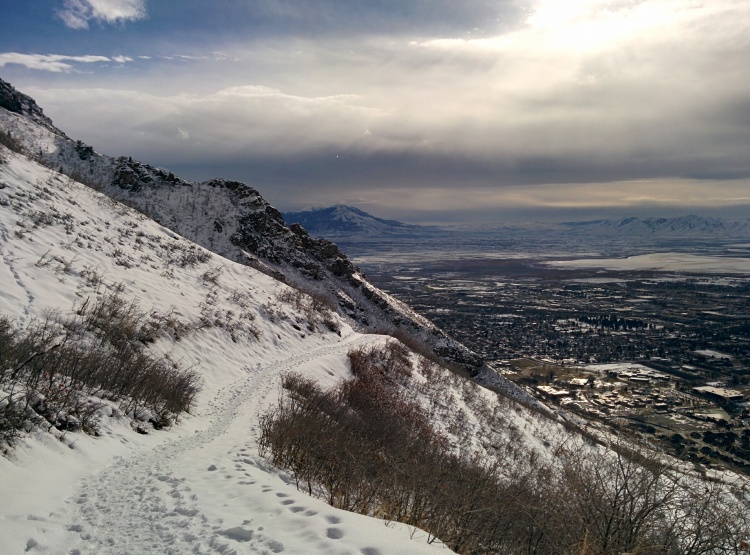 5. It gets better each time. I’ve done this hike at least 3 dozen times, and I think I’m low-balling that estimate. I can hike to the top and bottom without stopping in 35 minutes flat. It’s easy for me and I love going there to think.

I love this hike. No, it’s not the most picturesque, and it’s hard. But I have hiked this by myself, with Austin, and with friends and made fond memories.

Simply put: it’s doable. And for that I keep returning.