After our experience hiking the West Highland Way, we wanted to go see the Isle of Skye (or, as we couldn’t resist, the “Isle of Skyle”), so we took a bus up to Portree, the largest city in Skye. Its population is 2,491.

Because we were mostly winging this trip (something I do not recommend if you like bathrooms and warmth and happiness), all – and I mean ALL – the hotels and hostels on Skye were booked. We were dum-dums.

So! Camping it was. We hiked about a mile outside of town and found a lovely spot on a small cliff right next to the bay and parked our belongings there. (Again, this is all due to Scotland’s handy dandy wild camping laws)

The first night was pretty stormy – but it was a testament to how waterproof our tent actually was. The wind was what woke us up – not the rain, but the rain was pretty bad, too. We got out of the tent at around 5 AM when the storm stopped and the whole area was covered in fog. The sun was barely beginning to rise and we saw a green light across the way, just flickering off the coast. I felt like Gatsby, only less rich.

Mostly I was freezing while we slept. So I’d tap Austin on the shoulder and say, “I’m freezing, can you warm me up?” And he’d roll over on top of me while still in his sleeping bag (and mostly still asleep) and although squished, I’d start to warm up from his body heat. He’s my personal space heater. 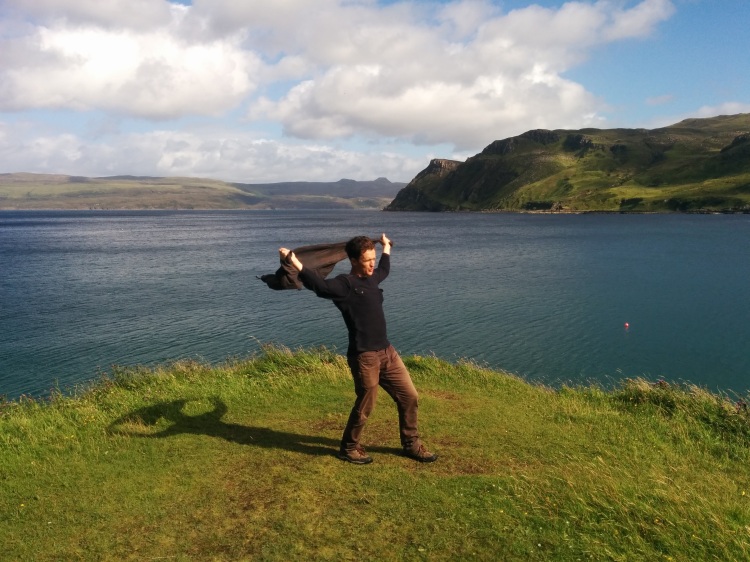 On the second day we did an AWESOME bus tour of Skye – and by bus, I mean large van. An old woman named Kathleen drove the van – she had grown up on Skye and was fluent in Scottish Gaelic and didn’t learn English until she went to school at age 5. She was very gracious to let us smelly travelers put our backpacks on her van for storage during the tour.

We went to a LOT of different areas – one area had a waterfall going straight into the ocean while a dude nearby played bagpipes for money. How Scottish can you get? 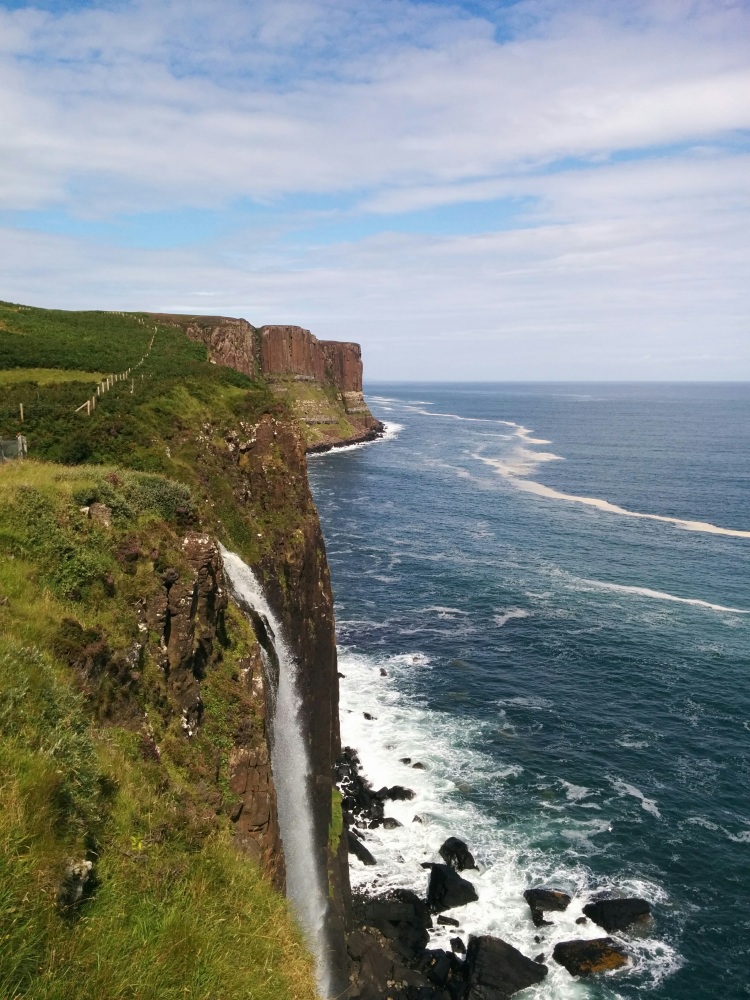 The next destination was the Quiraing – if these places look familiar to you, it was the filming location of Stardust (and other cool movies, I’m sure, but I thought mostly about Stardust) and its geology is otherworldly.

We were supposed to go to the fairy pools, but there was a bit of a holdup. A man had decided to drive his cows out of one enclosure into a pasture, and there were a ton of cars coming from both directions on what I swear was the world’s most narrow road.

Kathleen said, “Oh, this simply won’t do!” She got out of the car and waved at the cars behind us, directing them to turn around and back up so everyone could leave. She was single-handedly directing traffic, making sure we could get out of there and on with our day.

I was disappointed to not see the fairy pools, but honestly, hanging out with Kathleen made the trip delightful. She told us stories of the early inhabitants of Skye, of the people who lived there, and all the craziness that happens when humans get together.

Would I recommend Skye? Absolutely. But it was freezing and we were wet, so on the third day we got some fish and chips and caught the next bus back to Glasgow.

After that, we hiked the Fife Coastal Path, which I will happily tell you about tomorrow.

5 thoughts on “Camping on the Isle of Skye”